Congress is expected this week to pass yet another short-term spending bill to avoid a government shutdown, prompting a bipartisan pair of senators to introduce a narrow bill on immigration aimed at ending the impasse that has hindered a two-year budget deal.

The government’s current funding expires at 12:01 a.m. Friday. Immigration has become entangled in the spending negotiations since President Donald Trump last year ended an Obama-era program that protects young people who were brought to the U.S. illegally as children, known as Dreamers.

Senate Armed Services Committee Chairman John McCain (R., Ariz.) and Sen. Chris Coons (D., Del.) plan to unveil a proposal that offers a path to citizenship for Dreamers and orders a comprehensive study to determine what border-security measures are needed. But the bill stops well short of almost all of the president’s demands—including immediate funding for the wall along the southern border—and is likely to meet a chilly reception from conservative Republicans.

Still, Mr. McCain, who was diagnosed with brain cancer last summer and has been working from Arizona since late 2017, retains powerful sway among his GOP colleagues. His bill with Mr. Coons could also benefit from good timing, as the March 5 deadline draws closer and lawmakers grapple with the political consequences of failing to reach any agreement.

“It’s time we end the gridlock so we can quickly move on to completing a long-term budget agreement that provides our men and women in uniform the support they deserve,” Mr. McCain said in a statement Sunday.

Senate Democrats agreed to reopen the government on Monday after it was shuttered over the weekend, in return for a promise to both debate and then vote on a plan in the Senate to give Dreamers a path to legal status. WSJ’s Gerald F. Seib explains what may be next for an immigration bill. Photo: Getty (Originally Published January 22, 2018)

“While reaching a deal cannot come soon enough for America’s service members, the current political reality demands bipartisan cooperation to address the impending expiration of the DACA program and secure the southern border,” he said, referring to the Deferred Action for Childhood Arrivals program.

The White House didn’t immediately respond to a request for comment on the bill.

Pressure has been mounting on lawmakers since September, when Mr. Trump ended the DACA program that protected its participants from deportation. Mr. Trump gave Congress until March 5 to pass a replacement, but Democrats have been pushing to resolve the issue more quickly to end the immigrants’ legal limbo.

The McCain-Coons bill is almost identical to bipartisan legislation in the House from Reps. Will Hurd (R., Texas) and Pete Aguilar (D., Calif.), which has the support of 27 Democrats and 27 Republicans in the House.

The senators’ bill would provide legal status and a path to citizenship for young immigrants who have lived in the U.S. since Dec. 31, 2013, aides said Sunday. That is expected to be a larger group than would be covered by Mr. Trump’s proposed 1.8 million people. 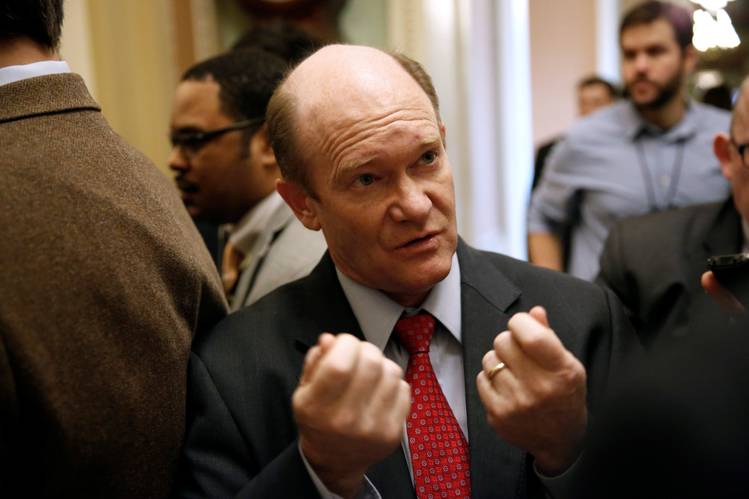 Sen. Christopher Coons (D., Del.) said an immigration bill he is proposing with Sen. John McCain ‘would allow us to move ahead with the bipartisan deal on lifting the [budget] caps’ and continue the broader immigration debate later.PHOTO: JOSHUA ROBERTS/REUTERS

Aiming to tighten border security, their bill calls for the Homeland Security Department to devise a strategy for situational awareness and operational control of the border by 2020. The bill would provide a $110 million annual grant for five years to improve coordination between border-patrol agents and state and local law-enforcement officials. It wouldn’t, however, direct any funding for border technology or the more-controversial barriers or wall that Mr. Trump wants.

The legislation also calls for clearing a backlog in the immigration-court system by hiring 55 new judges per year, as well as dozens of staff attorneys, for three years. The bill would also direct the State Department to submit a three-year strategy aimed at addressing the underlying causes of immigration from Central America to the U.S. Many Central Americans try to enter the U.S. illegally because of severe drug gang violence in their home countries.

In a framework released last month, Mr. Trump asked Congress to direct $25 billion toward a U.S.-Mexico border wall and other security measures, reduce family-based legal immigration, ratchet up deportations and otherwise tighten enforcement. Last week, Mr. Trump told Republicans gathered for their annual policy retreat that he was prepared to walk away from negotiations if Democrats didn’t agree to his terms.

Mr. Coons said his bill represented a starting point to resolving the two central issues. “This narrower bill addresses the two things that every member agrees we have to address to move forward,” Mr. Coons said in an interview Sunday. Resolving that “would allow us to move ahead with the bipartisan deal on lifting the [budget] caps” and continuing the broader immigration debate later, he said.

Last month, the immigration fight culminated in a three-day partial shutdown of the government, a repeat of which lawmakers said they expect to avert this week. As part of an agreement in January that ended the shutdown, Senate Majority Leader Mitch McConnell (R., Ky.) said he would bring an immigration bill to the Senate floor on Feb. 8, so long as the government remains funded.

“There is not likely to be a DACA deal, though we’re working every single day,” Sen. Dick Durbin of Illinois, Democrats’ chief negotiator on immigration, said Sunday on CNN. Instead, he pointed to the upcoming debate on the Senate floor as the path to potentially reaching a deal.

“I don’t see a government shutdown coming, but I do see a promise by Senator McConnell to finally bring this critical issue that affects the lives of hundreds of thousands of people in America, finally bringing it to a full debate in the Senate,” Mr. Durbin said.

Write to Kristina Peterson at kristina.peterson@wsj.com and Laura Meckler at laura.meckler@wsj.com